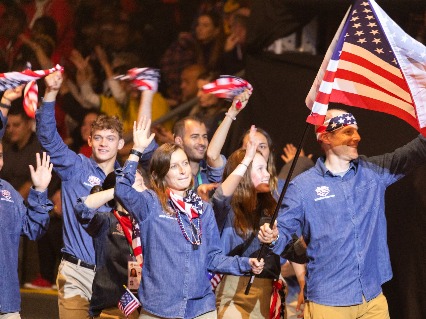 Kate Ward and John Klish lead the United States delegation into the Parade of Nations during the Opening Ceremony of the 24th Summer Deaflympics in Caxias do Sul, Brazil (Photo: USADSF/Julian Simons)

CAXIAS DO SUL, BRAZIL — Speaking in front of a raucous crowd at the Centro Esportivo SESI, Gustavo Perazzolo, the President of the International Committee of Sports for the Deaf signed, in International Sign, the long awaited words: “I declare the 24th Summer Deaflympics open!” Meanwhile, the Deaflympic Cauldron was alight with the Deaflympic Flame, a symbol that the Deaflympics are open.

The Opening Ceremony, televised in Brazil and broadcasted internationally via livestream, featured the Parade of Nations, performers spiraling around the stage in traditional Brazil dances, and a number of diginarities, including the President of Brazil, Jair Bolsonaro, and the First Lady, Michelle Bolsonaro.

Before the Opening Ceremony, Kate Ward (Women’s Soccer), a two-time gold medalist who first participated in the Deaflympics in 2009 and is participating in her third Games, and John Klish (Men’s Cycling), a 3-time Deaflympic medalist—including a Gold in 2013—who is also taking part in his third Deaflympics, were named United States Flag Bearers. Due to limited capacity, only fifteen members of the United States delegation could participate in the Parade of Nations. Those unable to participate watched the Opening Ceremony through a watch party hosted by USADSF.