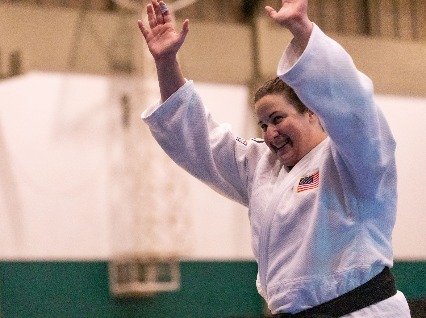 CAXIAS DO SUL, BRAZIL — The fourth day of the Deaflympics was full of wins and medals for the United States.

For the first time in American history, the United States was represented in Judo. International level Judoka Nina Cutro-Kelly made her Deaflympic debut in the +78kg category, and captured the hearts of American fans who showed up to cheer her on. She won both her rounds in the morning, securing her place in the gold medal match in the afternoon. In the final, the Polish opponent tapped out in 39 seconds, giving Cutro-Kelly her first Deaflympic gold medal.

The USA Deaf Cycling squad sent three of their cyclists to compete in the Road Cycling Time Trials. Deaflympic veteran John Klish led the way with a 6th place finish, followed by rookie Blake Herbold in 10th place. Rory Osbrink earned himself a 16th place finish in the event.

Over at the Tennis center, the American trio of Christopher Daniels, Esteban Kovacs and Alfredo Galvez began play. Daniels and Kovacs both dropped their first matches. Alfredo Galvez, on the other hand, battled a 17-year old rookie from Argentina, and came away with a 6-4, 6-4 win.

The men’s basketball team opened pool play against Kenya, which was making their basketball debut in the Deaflympics. The effort and motivation of the Kenyan players was clearly on display, but the experience and size of the United States was too much, as the USA won, 143-18.

Seeking to stay in contention in their pool, the USA Men’s Deaf Soccer team defeated Mali 2-0 to keep their medal hopes alive.

Follow this link for The Daily Moth's video recap.