Team USA Wins 5 Medals on the First Day of Competition 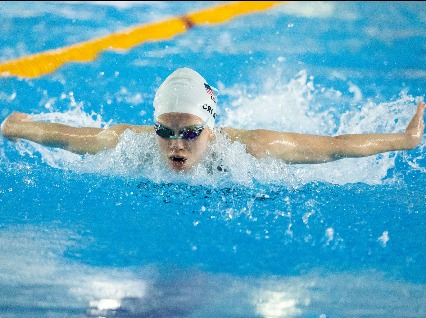 Carli Cronk swims during a preliminary heat of the Women's 200M Individual Medley in Caxias do Sul, Brazil on May 2, 2022.

CAXIAS DO SUL, BRAZIL — In the first full day of competition, Team USA swimmer Carli Cronk won her heat in the Women’s 200m Individual Medley preliminary two separate times after the officials’ timers malfunctioned during the first heat. Competing in the finals later in the day, she exhibited mental toughness despite having to swim twice earlier in the morning, and went on to win her first-ever Deaflympic Gold in record-breaking fashion. With an impressive time of 2:25.91, Cronk shattered the Deaf World record by nearly four seconds.

After coming off a strong 4-1 win against Iraq on Saturday, the USA men's soccer team took a tough 0-1 loss against Turkey. Pools of water covering the field from the recent downpour made for a very challenging game. However, Turkey finally made the only score in the 88th minute to hand the United States a heartbreaking loss.

On the wet pavement, Blake Herbold of the USA men’s cycling team advanced to the 1000m sprint semifinals before eventually taking a fourth place finish.