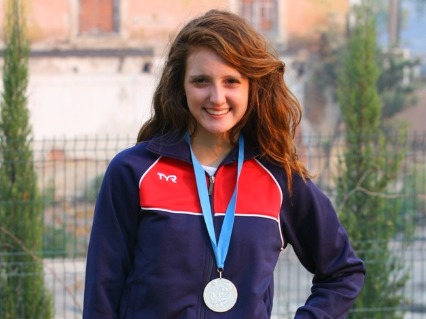 Though the crowd's cheers reverberated across the Portuguese natatorium, Abby McAlpin, 17, didn't need to hear them to propel herself through the water toward two silver medals and a bronze during the World Deaf Swimming Championships earlier this year.

McAlpin, who loved the pool even as a toddler, is now a junior and swim team member at O'Connor High, tallying laps until the 2013 Deaflympics.

She swims eight miles a day and said she's found her purpose since becoming one of the 20 athletes on the U.S. deaf swimming team this past year. As a whole, the U.S. team took home the World Deaf Swimming Championship trophy in August, said their coach, Bill Snape.

"Before this whole Portugal trip, I was always kind of insecure and I would hide my hearing aids," said the young athlete who was born with nearly 90 percent hearing impairment. "After this trip, I'm just so much more confident. I'm deaf, and I'll flaunt it. I'm deaf and look what I've done."

Rather than sign, McAlpin learned to lip read and speak at Sunshine Cottage School for Deaf Children.

During an early morning practice at the Northside Independent School District natatorium last month, McAlpin's arms sliced down her lane like a pinwheel only half visible above the water.

But Bill Thomas, coach for Northside's Alamo Area Aquatic Association team, thought she could tackle her backstroke drill with more energy. After getting her attention, he yelled, "Go faster!" while motioning down the lane with his hands.

She upped her speed, and he approved with a thumbs up.

It was at Thomas' urging that McAlpin joined the U.S. deaf swimming team.

"I'd heard about (the team) a couple of years ago," said Thomas poolside, raising his voice over the splash of practicing swimmers. "I investigated it to see what could come of it and saw that she was already faster than a couple of their records."

Though speed wasn't an issue, raising $5,000 to fund McAlpin's trip to the championships in Coimbra, Portugal, was. Thomas said McAlpin had help from the U.S. deaf swimming team, her local booster club and her family. Even her teammates pitched in by holding a benefit swim meet for her in May and collecting entry fees to fund her trip, Thomas said.

But McAlpin faced adversity in her first event at the championships in August. Thomas said McAlpin was disqualified in the 400-meter individual medley for turning too early as she switched from backstroke to breaststroke.

"I was really upset about that, but I didn't let it get to me," McAlpin said. "I cried all day and woke up the next morning and was like, 'OK, it's a new day.'" McAlpin bounced back and earned a silver medal in the 100-meter backstroke, a silver in the 200-meter backstroke and a bronze in the 4×100-meter medley relay.

"She is one tough, competitive person, and she clearly thrives on that," Snape said. "There she was one minute on deck talking about hairstyles and clothes … and she gets in the water and it's all business, still with a smile on her face."

After two hours of swimming practice at Northside's natatorium, McAlpin hoisted herself nimbly from the pool, pulled off her O'Connor swim cap, wiped the water from her auburn hair with a towel emblazoned with the Portuguese flag and affixed her hearing aids.

As the goggle rings slowly faded around her eyes, she mentioned her plan to speak to younger hearing-impaired students about her experiences and her desire to study special education in college so she can continue to help.

"I was in their situation. I've been made fun of before, and it's hard," said McAlpin, who was mocked in middle school for her pronunciation.

"I would go home and cry about it, but my parents just made me feel so much better," McAlpin continued. "They were like, 'You're deaf for a reason.' And I never believed them. But when Portugal came around, I was like, 'OK, this is it.'"

Now Snape and McAlpin, who her coach described as a tiger in the water, are looking forward to more international competition at the Deaflympics.

"Abby McAlpin is going to be right in the thick of it."