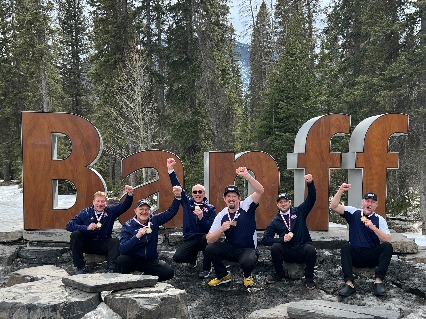 In a surprising upset, the Curling Team USA Men won over the undefeated Ukrainian team to win their first-ever gold at the 4th World Deaf Curling Championship in Banff, Canada March 26, 2022. Participating countries were Canada, Korea, Poland, Switzerland, Ukraine, and the United States of America.

Round robin games began March 18 with team USA finishing with a 3-2 record, initially losing to Canada and Ukraine. USA was stated in the playoffs as the number 3 seeded, defeating #4 seeded Switzerland where the USA was able to comeback with a tie in the end, forcing an extra end where USA gained an extra point.

In the next semi-finals, the USA played vs number 2 seeded Canada, making a comeback tie in the last end. The USA scored the winning point in the extra end again, 9-8, giving Canada its bronze medal. The highly anticipated final championship game pitted the USA against the number 1 seeded and previously undefeated team Ukraine. The USA began on a low end with Ukraine leading at 4-0. But the USA made its comeback for the third and final time, stealing three straight ends the USA was able to steal 3 ends to finish the game 10-6, handing Ukraine the silver.

The USA Women’s team finished 4th and the Mixed Double finished 5th. USA Men previously medaled as silver at the 2007 Winter Deaflympics at Salt Lake City and bronze at the 2017 World Championship in Sochi, Russia.