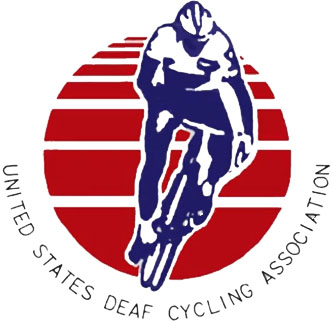 USA’s Deaf Cycling team is on fire and ready to race at the World Deaf Cycling Championship in Mont Tremblant, Canada June 10-17, 2011. As all the cyclists are training, Paul Wood, the Deaflympics cycling coach is restlessly preparing for the upcoming championships.

Wood, a six-time-Deaflympian, has earned ten medals: five gold, four silvers, and one bronze. With 22 years of cycling experience, Wood will now be on the sidelines and compete as a coach for the first time during the upcoming World Championships.

“I’m looking forward to the World Championships. It will be great change for me because I won’t be the one on the field now. I will have to watch my players do well,” Wood said.

There are high expectations this year for U.S. veterans Nick Schreiber, Trevor Kosa, and Scott Staubach. All three have medaled at previous World Championships and Summer Deaflympics, and they are expected to medal at the upcoming Worlds.

These three elite cyclists attended the 21st Summer Deaflympics in Taipei in 2009 and the U.S. earned two out of four possible gold medals.  Unfortunately, Staubach of Ala. left Taipei narrowly missing the medal podium during the individual time trial event by placing fourth. Wood has faith that the result will change this summer.

“Watch out for young rookie, Ryan Catron,” Wood added. “He has a lot of potential.”

The 19 year-old cyclist, Catron of Ind., just joined the cyclist team. With his fresh willpower and determination, Wood believes that Catron will bring a lot of his potential on the road.

During the off-season, the cyclists’ training has focused on core conditioning with drills and intervals. To enhance experience and confidence, Wood has instructed the U.S. cyclists to compete in local races before the World Championships.

Like all other deaf and hard of hearing elite athletes, cyclists are at a disadvantage of living in different states and not financially supported by a cycling association or the U.S. Olympic Committee.

“Cycling is a very expensive sport,” Wood stated. “The cost of a bike does not include competition fees and the cost to maintain training.” To be a deaf athlete, encompassing motivation and money is the key of a successful team. However, compassion for cycling beats the financial problems.”

In order to be competitive among the international cyclists, Wood believes the U.S. has a strong chance to compete as a team at the Worlds. “Our strategy is stronger as a pack,” Wood said. “With the ability to study the course of the Canadian trails, it will be an advantage for the U.S. team.

While the final entries are were not due until May 20, Wood did not know which countries and which competitors will be appearing in Canada. However, Wood isn’t waiting. “We need to look out for the Russia Federation,” said Wood.

No matter which country enters the Worlds, the U.S. is here to win and compete for a spot on the medal podium at the World Deaf Cycling Championship.